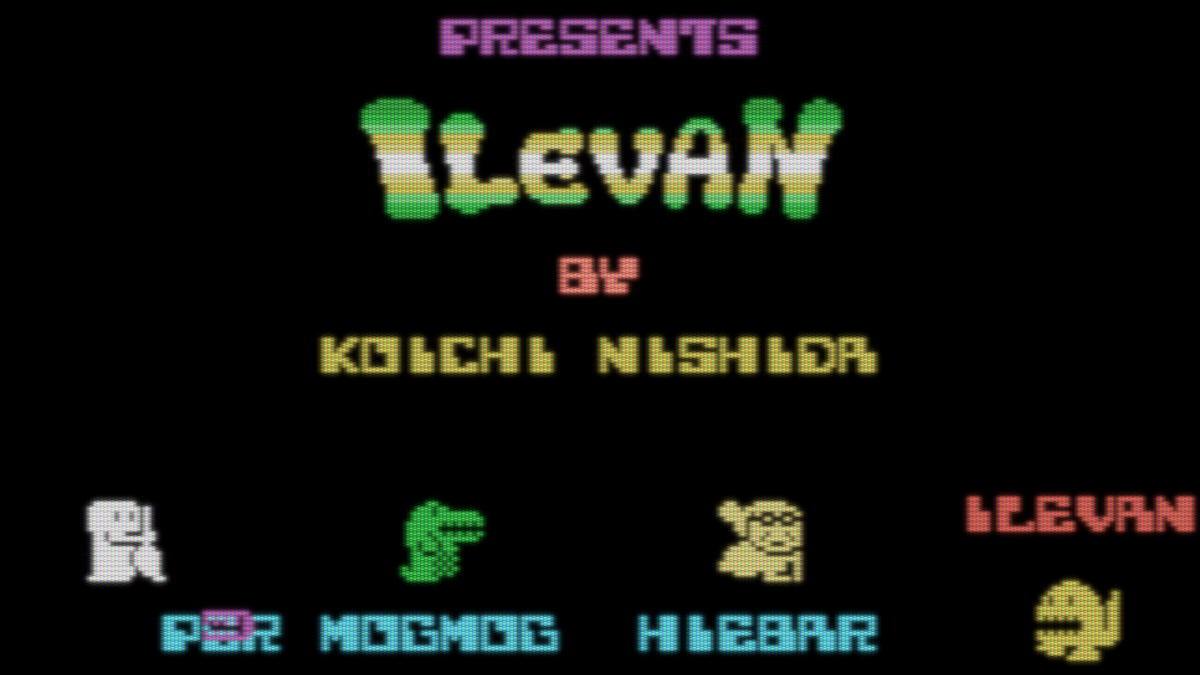 When I received my copy of ILEVAN and inserted it in my MSX I felt as if I had been transported in time back to the 80s and was staring at a commercial game developed back then.

That's because it was.

Mr. Koichi Nishida of Tulip House developed this game in 1987 when he was in high school. He later submitted it to the POPCOM magazine (a computer magazine published in Japan between 1983 and 1994). ILEVAN won and was published as a type-in program. The only problem? It was 12 pages long, so not many people had the chance to play it.

Because of this, Mr. Nishida decided to release it in 2017 as a very limited edition ROM cartridge, both for MSX and the Japanese Famicom. 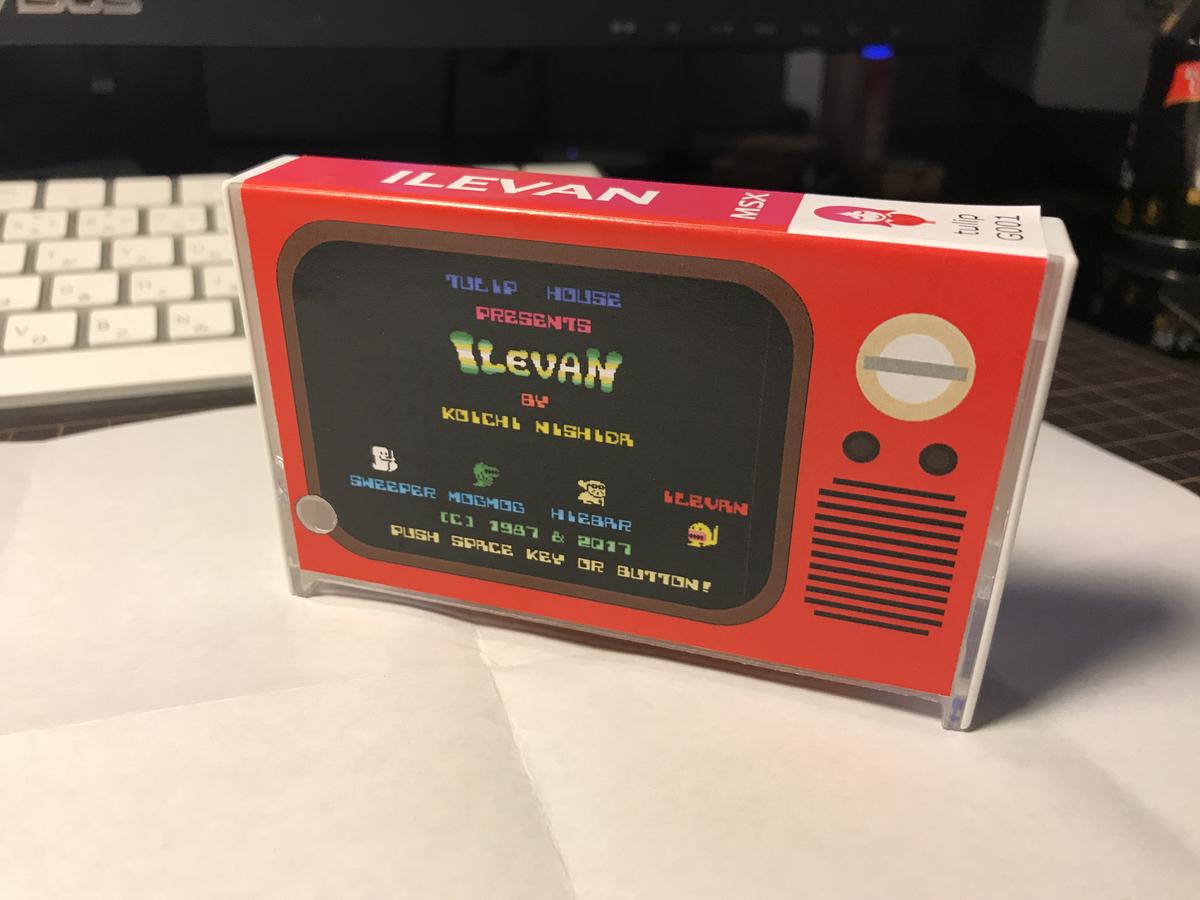 If the cartridge looks unusual, that's because it is. More on this later.

The objective of the game is to eat all the food on the screen (cakes, pudding, rice crackers and gum) and end each level with a certain amount of fullness. The main character, ILEVAN, can reach the food lying around in platforms by climbing ladders, or by stepping into one of the two teleporter mouths in the map.

Simple enough? Well, not actually. The game rules are very complex. This results in a game that's very fun, but also extremely difficult. It helps to know the characters and how they behave:

This is the main character. He has a purple set of dentures that he needs to chew food. Without them he can only eat pudding.

These cute crocodiles walk randomly around the screen. They also need dentures to eat.

When there's poo in the screen (more about this later) they will come out from their hideout and start cleaning up.

A nice old lady... until she eats a spicy KARAMUPO.

They sit somewhere on the screen not moving. When ILEVAN enters one of them he will be transported to the other.

From left to right: cake, gum and pudding. There are also rice crackers and spicy KARAMUPOs, but I've been unable to reach a round with them.

Yes, poo. ILEVAN can poop on any platform. The one on the left is a normal poo, and the one in the right is a power poo.

At the top of the screen there is a scoreboard indicating the score and number of lives left, and also the odor and fullness.

To complete a round ILEVAN has to eat all food on the screen and reach a certain level of fullness that changes on each round. The intermission screen shows the amount required.

The MOGMOGs on the screen normal walk randomly, but if ILEVAN's breath becomes too smelly (usually when odor becomes 4 or higher) then they will start chasing him. MOGMOGs don't kill ILEVAN, but they will steal his dentures and start eating the food on the screen. The only way to remove all the breath odor is to eat a gum.

ILEVAN can avoid the MOGMOGs by jumping (pressing the SPACE key on the MSX). When he jumps he leaves behind a normal poo, and his fullness decreases by 2. If the MOGMOG that stole the dentures touches a poo then he will drop the dentures and ILEVAN can pick them up again.

In higher rounds there are fake cakes. An skeleton called MIRAO hides in them. They can kill ILEVAN if they touch him, unless they step on a poo. When that happens they stop for a few moments, in which ILEVAN can touch them without being killed.

SWEEPERS don't like to see poo on the screen, so the moment ILEVAN poops they will hurry to clean it all.

If the MOGMOGs are too overwhelming, ILEVAN can poop a power poo (pressing M in the MSX keyboard). This decreases his fullness by 4, but after a few seconds the power poo explodes, killing all nearby MOGMOGs. The power poo will explode immediately if ILEVAN eats a pudding.

The old lady HIEBAR usually walks harmlessly around the screen. However, if she eats a spicy KARAMUPO she'll turn red. When that happens she will kill ILEVAN if she manages to catch him, and she'll also fart dangerous gas clouds that will kill him if he touches them.

However, if ILEVAN manages to eat the KARAMUPO first then he'll be able to throw his dentures (by pressing SPACE on the MSX). MIRAO will change his movement direction if he gets hit by the dentures, but then MOGMOGs can steal them. It the dentures hit a SWEEPER then he will go back to his hideout for a while.

As if this wasn't enough, rice crackers are hard. So hard, that if ILEVAN eats four of them his mouth will tire and his dentures will drop.

Sometimes it becomes impossible to complete a round, maybe because ILEVAN pooped too much or because MOGMOGs ate the food. In these situations, ILEVAN can commit suicide (D key on the keyboard).

This set of complex rules make the game extremely difficult (I have been only able to reach round 2), but also very fun. 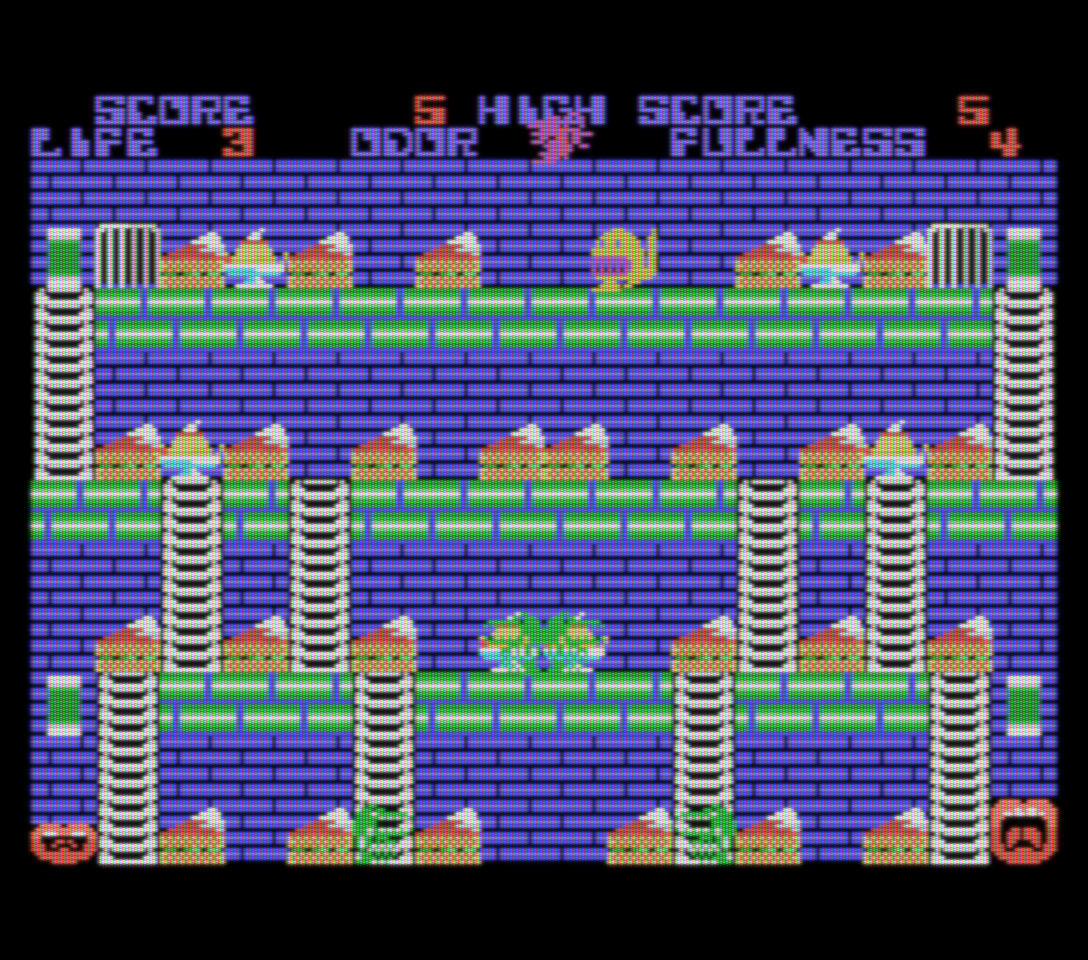 The graphics are very colorful, but the character sprites only use a single color each. This makes the game screen confusing sometimes because there's a lot of stuff moving around. Also, sprites will often flicker a lot when more than four of them are in the same horizontal line. Other than that, the patterns make good use of the MSX1 limitation about only being able to display two colors per line.

The PSG soundtrack is very animated and matches the crazy action on the screen very well. There are also plenty of sound effects for several actions in the game, so even when the music repeats it never feel monotonous.

ILEVAN doesn't have any special hardware requirements. It will run on any MSX computer.

The game is sold without a box. It arrives in a padded envelope containing the cartridge (wrapped in a plastic bag for protection) and a printed page with the instructions. Basic, but adequate for a budget title like this.

I mentioned before that the cartridge looks unusual. This is because since Mr. Nishida couldn't find cartridge cases easily, he decided to make his own using cassette tape cases. It happens that the MSX cartridge slot is the same size as a cassette case, so Mr. Nishida used this to his advantage. The cartridge's circuit board is carefully placed in the center of the case and held there with three blocks of beige padding. Each case has been machined to have the openings required by the MSX cartridge slot specification. The case is kept closed by the sticker that covers the front and top of the cartridge.

This results in a cartridge that is fully functional, but delicate. Mr. Nishida recommends handling the cartridge with care. 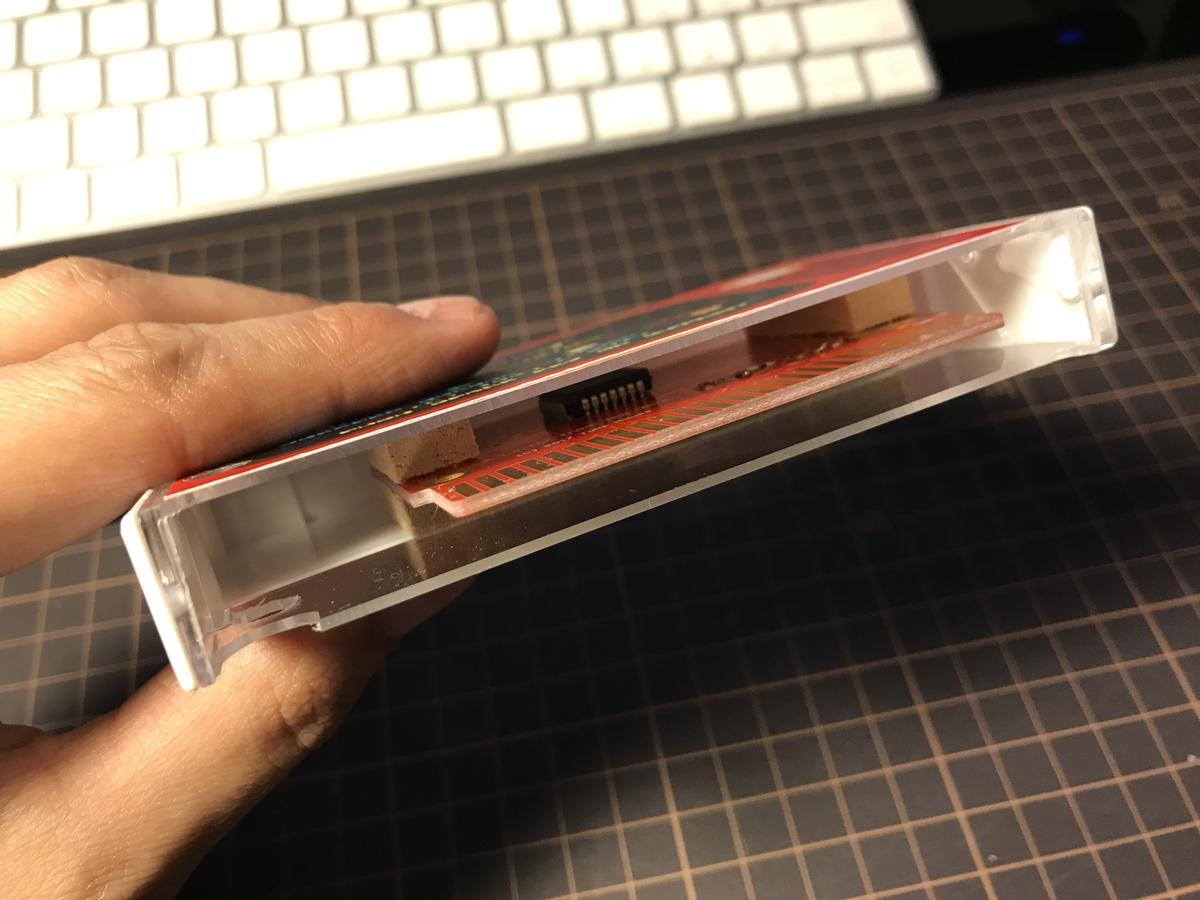 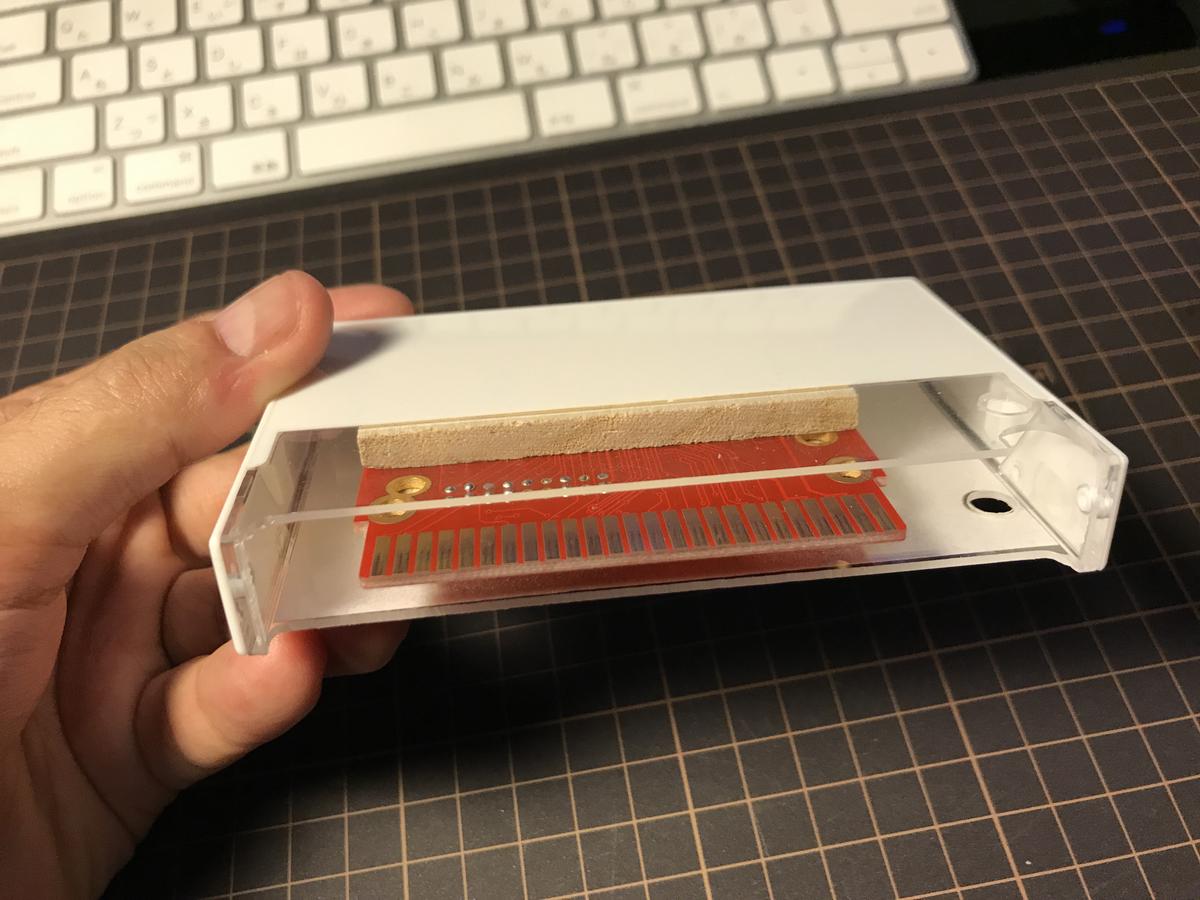 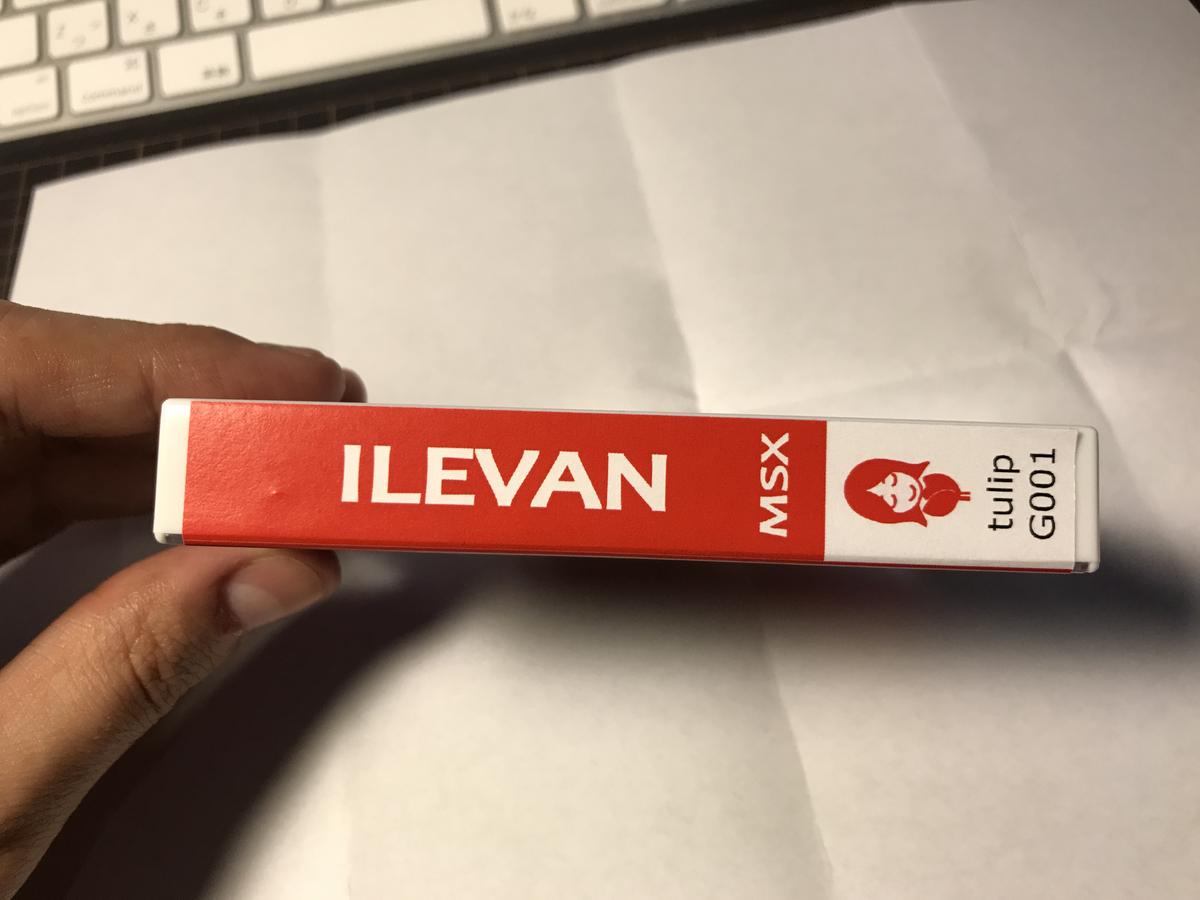 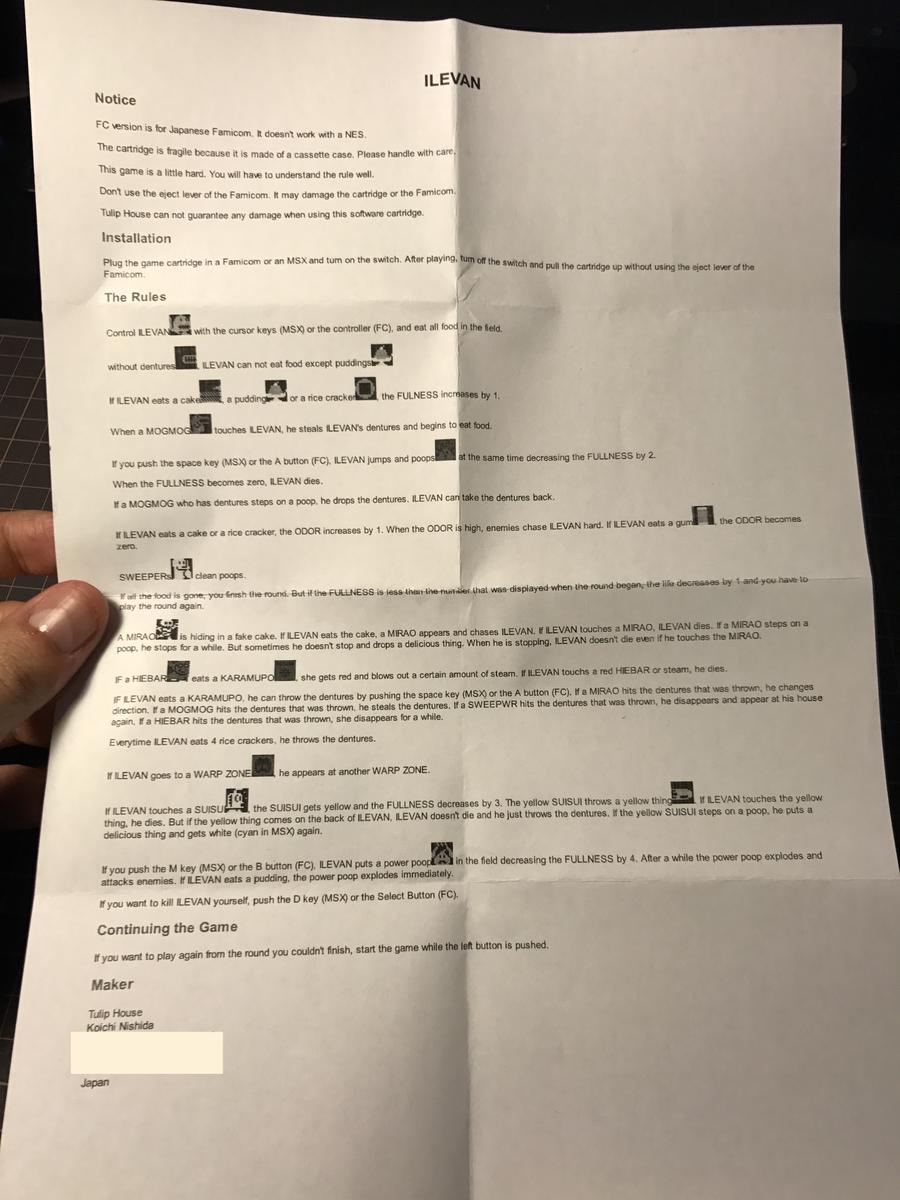 This is a video of me playing ILEVAN. It's long because of the difficulty, so click the links below to access directly some of the events in the gameplay.

This is a very fun game, regardless of the difficulty and the flickering in the sprites. Everything in ILEVAN is consistent with what games looked and sounded like in the 80s.

The presentation could have been more polished by using an actual cartridge case and providing a box and a printed manual, but overall it is more than adequate, considering the low price of this game.

Personally, I think it's a nice game and I recommend buying it.

Mr. Nishida sells ILEVAN through his web site. The price is US$28, plus US$6 for worldwide shipping. This applies to both the MSX and Famicom versions.

At the time of this writing, both versions are sold out because the initial batch was very limited. However, it seems that he's going to produce new units, so keep an eye on his website.

ILEVAN (English)
Fun game written in 1987 by Koichi Nishida, released in 2017 for MSX and Famicom.