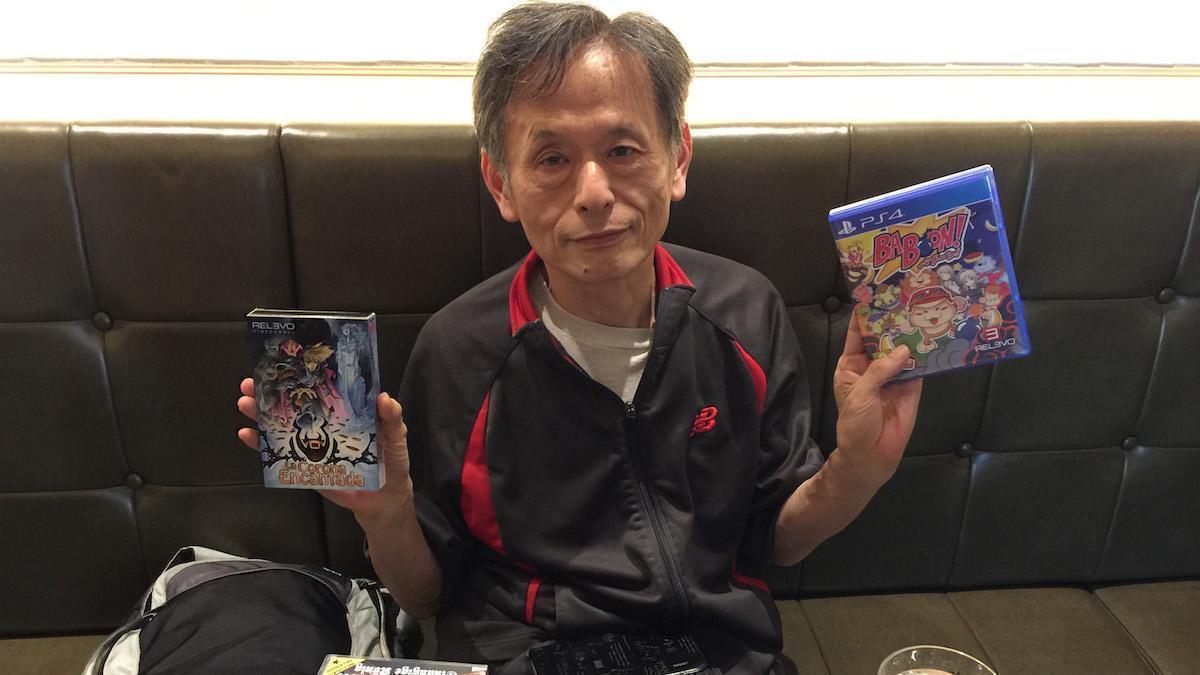 Masamitsu "MOO" Niitani was the founder and president of Compile for the whole existence of the company. He produced, directed, or was otherwise involved in a large number of games, most notably the Puyo Puyo series. Recently he started another game company named COMPILE◯ (read "Compile-maru") and he's already released one game for the Nintendo 3DS.

Last weekend we were talking to him in Akihabara and we took the chance to ask him a few questions about his beginnings, his current projects, and how he sees the MSX community today.

MSX Center (Javi): Niitani-san, thank you for taking time to talk today in this noisy cafe. I know that an MSX user from Finland visited you recently and interviewed you, so I'll try not to ask the same things.

You founded Compile in April 1982. How did you get involved in computers, and what was your first machine?

I wanted to use microcomputers, and the only options were the PET, the TRS-80 and the Apple II. The Apple seemed to have the best specs. The other two didn't support 64KB, but color... color was everything. The Apple II had a color display. The others were black and white.

Javi: You were 28 years old. And just four years after that you founded Compile. That's impressive. How did you learn to code?

Moo: The Apple II didn't have documentation in Japanese, everything was in English. I started by writing assembly code and assembling by hand, using pen and paper. We didn't have a macro assembler yet. I remember that my first game was a bowling game for the Apple II written in BASIC with parts coded in assembly.

Javi: When we played your games in the 80s and 90s we often saw your name in the credits, but back then we couldn’t easily communicate with the developers. Today, with social media sites such as Facebook or Twitter people from all over the world are aware of what you’re sharing and can easily contact you. How do you feel about this?

Moo: Well, it's normal, that's the only thing I can say. Things are different today. I feel that how we use social media in Japan is interesting. Twitter is popular here because the older generation doesn't like to use their real names on the Internet, so we often use nicknames in order to keep our privacy. Facebook only allows real names, so we use Twitter to connect to people from back then, precisely because it is anonymous. Isn't that a paradox? And look at how many Japanese YouTubers don't show their face: some of those "followers" are actually stalkers!

The Internet really took off after the release of Windows 95, but I think that Twitter has had a very big impact. Even Trump uses it! How long is it since they launched? 6, 8 years... no, longer than that. Before Twitter, companies used press releases to communicate to the public, but now they're able to use plain language and keep a two-way conversation.

Javi: I know that in the past you organized events related to Puyo Puyo. Can you tell us about those?

Moo: Yes! In 1993 we launched Super Puyo Puyo. It sold 1.8 million copies, so in 1994 we went to the Tokyo Toy Show. We put a small 5m x 5m booth for the first time, and from the moment the show opened we had around 1000 people inside the whole day! On a 5x5 space! That was quite surprising. In the end that was a success.

Javi: ...but that's not what I meant. I've seen photos of you wearing a costume of Satan from Madō Monogatari...

Moo: Oh, that was later! They made me do it. Anyway, coming back to Puyo Puyo, I thought that players would like to compete with each other, so we had competitions here and there where players gathered to play, and I thought "well... we should make a bigger event, a master competition for players from all over Japan, once a year"... so we did it. The first one was in... hmm... 1995... January... 15? Yes, January 15th 1995. We had this master competition, and just two days after that the Great Hanshin Earthquake happened... So, anyway the smaller events already gathered about 1000 people each, and the master competition attracted many more players.

Javi: And what happened in these competitions? Did players compete against each other?

Moo: Yes, we made groups of 16 or 32 people and organized leagues or tournaments to decide who was the best player... I feel a bit weird saying this, but maybe... the start of eSports... maybe that was us. Hahaha. We did three of these competitions: 1995, 1996 and 1997. In 1998 we couldn't do it anymore because of the restructuring.

Javi: Let's talk now about your current projects. Last year you started your new company and released Nyoki Nyoki for the Nintendo 3DS in Japan. I've already played it, but for those who haven't, can you tell us about it?

Moo: Nyoki Nyoki is something that I had been thinking about for a long time... how to say this in English... my "home work"... no, that's not the right word, but close enough. Anyway, Puyo Puyo had two problems. First, it takes a very long time to learn how to chain blocks. At the pro level it may take up to three years. That's the first one. The second: beginners. When a beginner plays against a pro he has no chance at all. The final score will be 100-0. That's the second one. So what happens? You don't get new players because they get beaten up by the ones who have been playing for a long time. I wanted to find a solution to these two problems. Rather than selling the game, what was most important for me was to find the solution. I thought about it, about how to handle the logic, and about 7 years ago I came up with the concept for the game.

We already tried to solve these problems when we launched Pochi to Nyaa, but we failed. What happend was that it became even more difficult than Puyo Puyo. It was difficult for beginners to compete. So we learnt from the experience. We could say that Nyoki Nyoki is a sequel to Pochi to Nyaa that fixes these two problems.

I wrote the game logic, but I didn't know whether it was going to be appealing for players, so last year I showed it to a few people around me, mostly fans, and looked at their reaction. I have been making games for many years, and in this kind of puzzle games it takes some time to learn the rules and have fun. With Nyoki Nyoki they became hooked in the first few minutes, and I knew I was on to something.

I thought the best thing to do was to show it to Nintendo and ask them to sell it, and that's when they suggested I started my own company to sell it. That's not something I was planning to do, but it was the same when I founded Compile: at some point you need to take that step in order to keep moving forward. I started COMPILE◯, and that attracted a lot of attention. 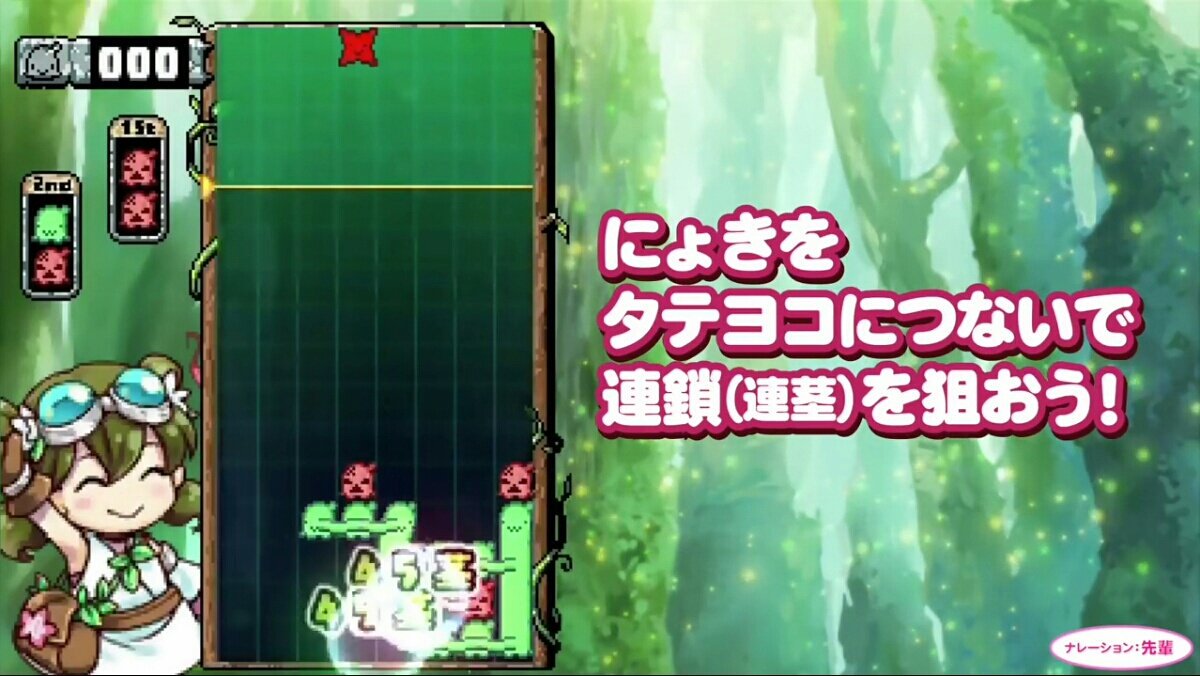 Javi: So what future plans do you have for Nyoki Nyoki?

Moo: I'm thinking about porting it to the Nintendo Switch... and to smartphones. Switch and smartphones. The Switch is a consumer market that we already know well, so that's easy. About smartphones, the difficult part is monetization, how we're going to make money with it. Anyway, I think both version should do well. For now we'll focus on the Switch version. I think we can sell about 100.000 copies. Hopefully more than that, but 100.000 shouldn't be a problem.

Javi: Is there any way users outside of Japan can buy Nyoki Nyoki?

Moo: Yes, as long as it's the Switch version. The Nintendo 3DS version isn't available outside of Japan because Nintendo charges about 3 million yen for that. I already spoke with them about this, but we didn't reach an agreement. Maybe this was because the Switch was launching soon and they prefer to have the content there...

Javi: Let's talk a bit about the MSX now. Your games were very popular among MSX users in Europe, but unfortunately, all of them were pirated...

Javi: ...and the later games from Compile were never officially released in Europe. Had piracy something to do with this?

Moo: Maybe. What we noticed was that even the games that we released abroad didn't sell well, and we didn't have good distribution channels, so we stopped. Piracy is something you can't do anything about.

Javi: Changing the subject, many people around my age grew up playing your games: the Zanac and Aleste series, Puyo Puyo... Those games had some influence during our growing years. How do you feel about that?

Moo: About that... hmmm... if I had to explain it somehow, it makes me feel like a school teacher. It's as if the people who have been playing my games were my students... you know, like when you graduate from school and sometimes you go meet your old teacher. I feel as if I was the teacher who made fun games. That's the feeling I have with my current company, because many of the users who follow me on Twitter did play my games during the Compile years. It feels like that.

Javi: Still today there are developers releasing games like these for the MSX (I hand him SILICON SEX's MÜLLWAND, Imanok's Tina's Adventure Island, and Relevo's La Corona Encantada and Baboon!). What do you think when you see these? 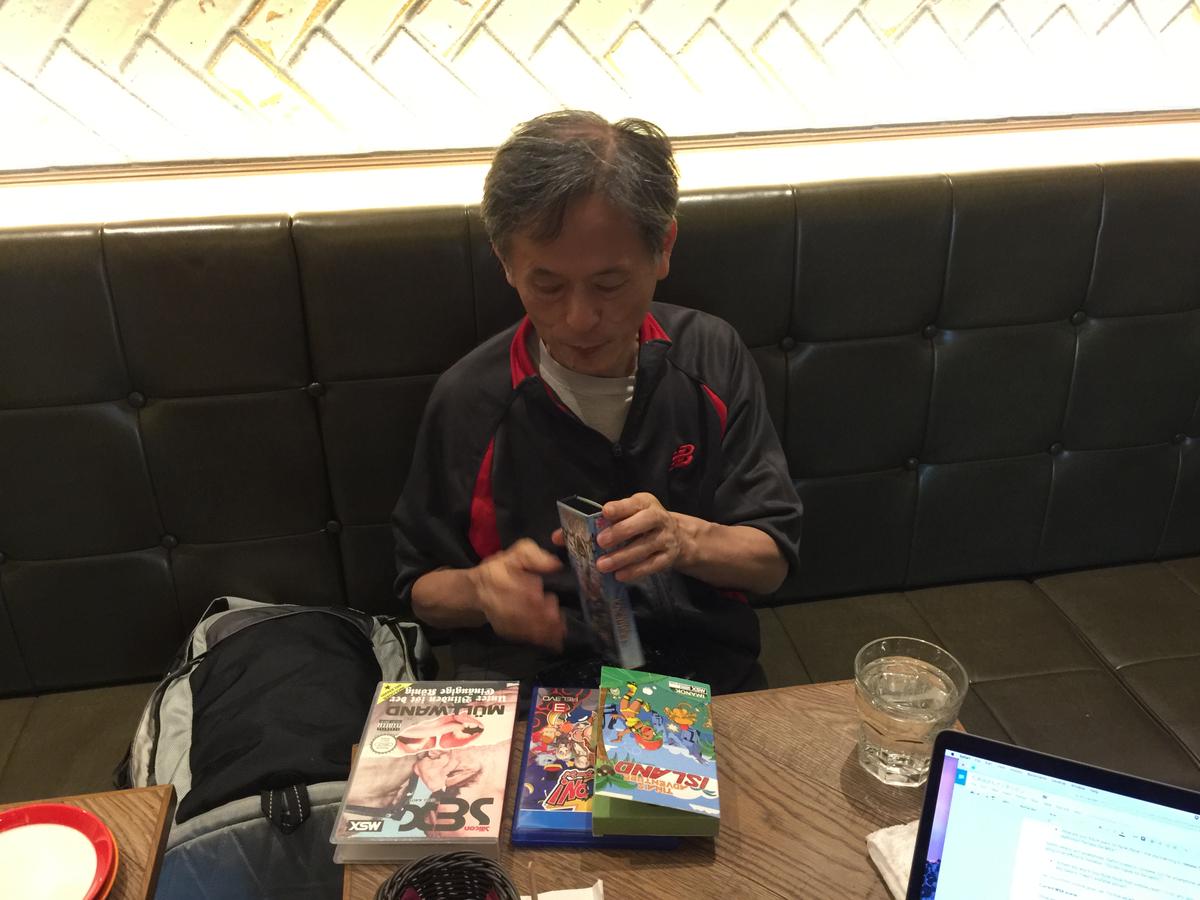 Moo: I think it's interesting that there's still a market for retro games. That's why you see things like the Nintendo Classic and the mini Sega Genesis that they announced recently. Even for us I think there's a market if we can sell, say, 50,000 copies or so. It feels a bit strange. I guess it's related to the long tail... the Long Tail theory in economics... because now thanks to the Internet you can make a small batch of a product and sell it easily even if it's a niche thing. I'm happy about it.

Javi: Well, I think that's about it. I've already taken a lot of your time. Thank you very much.

Nice interview, thanks for the effort! :D

Long life to this guy, Compile has a special place in every MSX user's heart.